Ethiopia, the Birth Place of Coffee and Coffee, Ethiopia’s Gift to the Word

More than 1000 years ago, a goatherd in Ethiopia’s south-western highlands plucked a few red berries from some young green trees growing there in the forest and tasted them. He liked the flavor-and the feel-good effect that followed. Today those self-same berries, dried, roasted and ground, have become the world’s most popular drink. The Ethiopian province where they first blossomed- Kaffa- gave its name to Coffee.

The story of coffee has its beginnings in Ethiopia, the original home of the coffee plant, coffee arabica, which still grows wild in the forest of the highlands. While nobody is sure exactly how coffee was originally discovered as a beverage, it is believed that its cultivation and use began as early as the 9th century. Some authorities claim that it was cultivated in Yemen earlier; around AD575.the only thing that seems certain is that it originated in Ethiopia, from where it traveled to Yemen about 600 years ago, and from Arabia, it began its journey around the world.

Among the many legends that have developed concerning the origin of coffee, one of the most popular accounts is that of Khalid/Kaldi, an Abyssinian goatherd, who lived around AD850. One day he observed his goats behaving in an abnormally exuberant manner, skipping, rearing on their hind legs and bleating loudly. He noticed they were eating the bright red berries that grew on the green bushes nearby.

Kalid tried a few himself, and soon felt a novel sense of elation. He filled his pockets with the berries and ran home to announce his discovery to his wife. ‘They are heaven-sent,’ she declared. ‘You must take them to the Monks in the monastery.’

Kalidi presented the chief Monk with a handful of berries and related his discovery of their miraculous effect. ‘Devil’s work!’ exclaimed the monk, and hurled the berries in the fire.

Within minutes the monastery filled with the heavenly aroma of roasting beans, and the other monks gathered to investigate. The beans were raked from the crushed to extinguish the embers. The Monk ordered the grains to be placed in the ewer and covered with hot water to preserve their goodness. That night the monks sat up drinking the rich and fragrant brew.

The year starts on 11 September in the Gregorian calendar or on the 12th in (Gregorian) Leap Years. The Coptic Leap Year follows the same rules as the Gregorian so that the extra month always has 6 days in a Gregorian Leap Year. The names of the months and their starting dates are as follows: 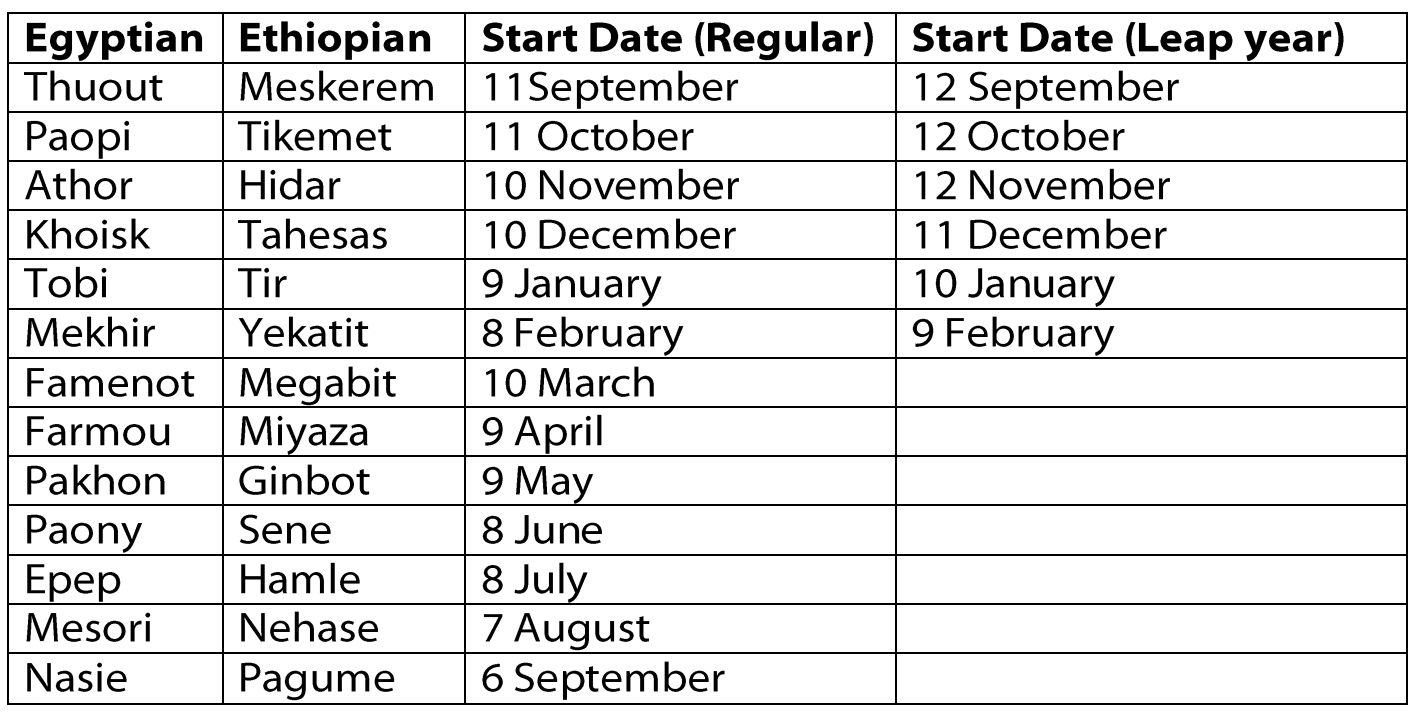 The Coptic New Year is a holiday in Ethiopia. Christmas falls on the 7th of January as in the Orthodox “old” calendar. Likewise, Epiphany is on the 19th of January. Easter would appear to be calculated according to the Orthodox calendar also. Christmas and Epiphany also do not appear to move by one day during Leap Years as they would if they were being set by the above calendar. Thus, it would seem that Christian feasts are set according to the Orthodox calendar rather than according to the Coptic. An Egyptian Coptic source simply describes the date of Easter as being “the second Sunday after the first full moon in spring.”

ETHIOPIA is an old nation. Old beyond imaginations with a history of 3000 years old; isolated on its mountain platform by surrounding flaming hot deserts, located at the crossroads of three major world religions.

Ethiopia has had a fascinating history witnessed today by ancient churches, castles and some of the largest stone obelisks ever The high mountain habitats also show the evolution of some unique endemic flora and fauna and spectacular sheer escarpments. In the southwest, the existence of some of Africa's most unvisited and decorative tribal peoples complements a wilderness experience replete with herds of big mammalian Animals (see map).

Ethiopia is the 10th largest country in Africa and has an area of 1.112,000 square kilometers, about 60 percent of - which is arable, with 15 percent presently cultivated.

The dominant feature is the high central plateau varying in height between 2000 and 3000 meters, with some mountains over 4000 meters.

The country has numerous rivers, most notably the Blue Nile (or Abbay).

Ethiopia the land of King Solomon and Queen of Sheba, its history according to recent archaeological finding stretches back to some 4.4 million years when the oldest human ancestor ever found walked its terrain. This land has always remained an enchanting mystery to all travelers. Today, Ethiopia enjoys the further distinction of being the oldest independent nation in Africa.

In Addis Ababa and the central part of the country, the weather is Spring- like year round, with warm days and only a sweater or light jacket required at night.